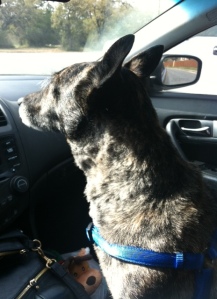 “Dogs are not our whole life, but they make our lives whole.”

Our family dog “Flint” for some strange reason totally freaks when it starts to rain. Thunderstorms bring him to sheer panic and his anxiety level can get so high that he gets totally out of control.

Two days ago my son left him outside and text me saying “Mom, I left Flint outside because he was all full of mud. I’ll be back in 2 hours and will give him a bath when I get home. Just letting you know so you won’t let him in.

I text him back and said…OK, n/p 😉
Now, when this happened it was clear and sunny but the day before it had been raining off and on very lightly so thats why there was mud outside and I guess the dog just decided to play in it as he does like to roll around the ground most of the time when he’s outside.

An hour later out of no where it starts to rain pretty heavily to include thunder and lighting and hail.
I wasn’t home yet and called home to see if Flint was back inside and ok since he freaks when this happens so much that you practically have to hold him down and reassure the dog its going to be ok because he’s terrified of storms.
But no one answers at home, and my son doesn’t pick up either.
After a few attempts my husband answers the phone and the conversation goes like this:
Me: Honey is Flint inside the house?
Him: I sure hope so I am just pulling in now.
Me: Andy left him outside b/c he was muddy and I am sure he didn’t know it was going to rain so bad. I’m worried about him b/c of the storm, he might be outside.
Him: Hold on let me check……….NO, he’s not here.
Me: Check under the beds
Him: He’s not in the house I would know as he starts to break stuff and gets very loud as you know.
Me: Oh my gosh, can you see him outside?
Him: NO, and I can’t go out there right now the rain is really bad and its still hailing over here. But don’t worry he must be under the deck.
Me: I sure hope so. : / I sure hope he didn’t have a heart attack under there as I bet he was totally freaked out with the storm.

Daughter: Mom we didn’t find him and I am sad. He’s a good dog and I’m worried he will be hit by a car since he loves to run after them. 😦
Me: I’m worried too but hopefully he’ll show up soon. 😦

That night I realized just how much I loved this mutt especially since we had just lost my own little beloved “Mason“ whom I wrote about a little over a month ago.
I couldn’t help thinking how powerful our words can be at times as when Mason passed away I remember being so upset I spoke the words “I don’t want anymore dogs or any more pets as its to painful when something unexpected happens to them.”
And now, Flint was missing.

Next morning we all went looking for him with no success.
But last night he showed up barking outside my daughters window and she went to go check and he was back 🙂

I can’t tell you how relieved and happy we all were to have him back home.

Flint is a very unique dog.
He’s not a good looking dog and in fact people usually stop and stair at him as he’s a bit scary looking. However, if I had to define him in a single word the word would be “Noble”.